Silver fragment (hacksilver) cut from the sub-triangular terminal of a bossed penannular brooch with a beaded border and three of probably four plain, domed bosses surviving, two of which have thick filigree collars remaining round the bases; the bosses are linked by two short, beaded bands with plain edges dividing the fragment into three fields of decoration, the one at the broad end enclosing an inward-facing animal of Johansen's creature type 4 with a squared-off snout, dot-punched eye and beaded ribbon body curled round to interlace with its own plain, single-toed limbs with spiral hips (only one foreleg is shown); the smaller of the other two fields contains the surviving head and two feet of a similar animal, while the third field contains a bird of Johansen's creature type 1b with a curved beak and beaded ribbon body interlaced with part of the body and neck of a second bird. The back is lightly incised with double rings round the heads of the rivets securing the bosses and with a possible line of OGAM lettering joining the two circles at the end; there is a testing nick on the longest edge. 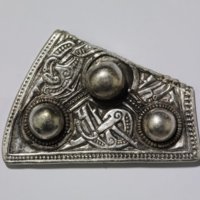 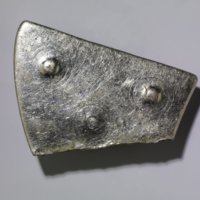 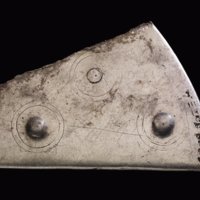