Silver fragment (hacksilver) cut from the inner end of the sub-triangular terminal of a bossed penannular brooch with one plain, domed boss surviving that is faceted round the base; at the hoop end of the piece there is a slight step up to a triangular panel with a round lobe projecting from its base on the inner edge; both the lobe and the other end of the base are punched with rings linked by a line of beading, behind which is incised a plain triangle with one hollow side and further bordered by two billeted lines, the one on the outer edge ending in a rectangular facet; similar billeted borders on the part of the terminal surviving beneath the step enclose an incised, knotted ribbon with a median groove partly surrounding the boss, which is further enclosed by a band of two billeted lines flanking a plain line; the back is decorated with part of a double incised ring round the end of the rivet securing the boss and, at the junction with the end of the hoop, with a plain, interlaced ribbon on a pointillé ground and a contour line; there are also two grooves and a group of light incisions next to the end of the rivet. There are three testing nicks on the outer edge of the fragment, two on the hoop end and four on the boss. 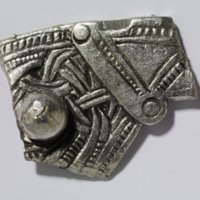 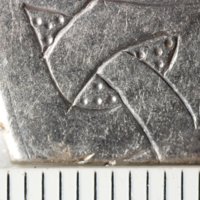